The Swallows are here

I came out of the café and looked to my right, and there she was: the first swallow of the summer. The unmistakable forked tail streaming below the wire, the pale breast, tawny in the soft morning light, the hint of cobalt and burnt orange. Her mate flew by and she rose in a sweep and they both entered the open door of the barn. The swallows are here!

The swallows. Those most stunning of Passerines, the heralds of light and heat, and summer sun. Renewal. Affirmation. First cousins of the lovely martins: the house martins who will nest under Conor and Jane’s eaves, and who I remember from my childhood in The Cork Road. The sand martins who sadly no longer nest on Woodstown Strand, but who I’ll see soon when I walk on Garretstown Strand later in the year.

But amazingly no relation at all to the mighty swift, that magnificent flying fortress, whose screams I hold dear from the Mediterranean urban skies of Thessaloniki, Collioure, Barcelona, Roma. The wonderfully named Apus Apus, from the Apodiformes family, whom the Romans believed didn’t have any legs at all, such was their wonderful aerial power and grace.

And then they are mature and then they mate. And they mate in the air. And then and only then, after 1,000 days of life on the air, will they touch a hole in a wall or a cliff, and build a nest and lay their eggs and hatch them. And then they fly again, for the following year. On the air. Magnificent isn’t the word for these wonderful creatures. Their beauty is beyond us. I can’t get my mind around it.

Peter and I were refreshed after the break from our cycle, as we came out of the café. Teas and scones and toast will do that. We’d been out early and we needed the pick-me-up. Now we were all set for the fairly short run home. But it wasn’t the tea and scone that powered me into the cold head-wind on the run back to Carrigaline. It was the fact that the swallows were here.

I’d risen early, at half past six, rested and feeling just fine; glad that I’d come straight home from the reading last night. Truth be told, the craft in the stories I’d heard was still tingling through my cerebellum as I showered, daunting and awesome in equal measure. Even more life-affirming now that the swallows are here.

At seven, the sunlight in Padraig and Mags’ lovely new kitchen was a marvel to behold. That low and pure morning light; the sun visible out over the harbour to the east. The immaculate shadow of some herbs and flowers on the frosted glass door of the utility room seems even more breath-taking in hindsight now. Now that the swallows are here.

I headed off around half past seven, while Blackrock slept. It was cool but I had all my gear and I felt just fine. Three angled plane contrails on the pale blue sky to the south east were like slashes of white across a Hopper canvas. The beginning of a cycle is a pleasant feeling in the first light of a Sunday morning. It would become even more lovely now that the swallows are here.

We went down the old railway path towards Passage West. Coming onto the path by Hop Island was like a Zen moment. The path was sunlit and empty and framed on the left by the sparkling water of the harbour at full tide. It reminded me of that stunning etching by Mark Fairhurst that we have above our dining room door. The path seemed hazy, endless and full of promise. Full of promise like the fact that the swallows are here. 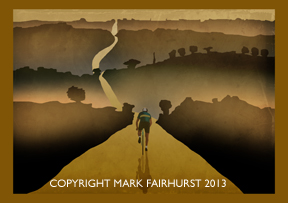 The song of blackbirds was everywhere this morning. They’re giving it Lowry all over the shop. They’ve taken over almost completely from the robins. High in the big beech trees outside Padraig and Mags’ house. All along the path to Passage. Through Rafeen and up the long hill on the way to Fountainstown, wherever there were trees. Birdsong is welcome up a straining hill. And now we have Whitethorn! There it was in all its glory, all along the steep climb out of Fountainstown, across from the banks of wild garlic, in flower since February. Where the sun was lighting up the sea, the sea so still it seemed unreal. TheWhitethorn has blossomed to greet the fact that the swallows are here.

On the last couple of kilometres into Carrigaline a fox jumped out onto the road to our right. He was big and bold, his tail a spectacular sight. It was the closest I’ve ever been to that legendary animal. I could see his fine white smile as he sauntered across the road – foxes don’t do rush. If I said he winked at me as he hopped into the ditch a few feet in front of my bike, I’d only be half lying. I felt like a character in a Saki story – not a familiar feeling for me. He must have been on the ran-tan over in Curabinny Woods. Or at an all night fox rave in Monkstown, after which he enjoyed the dawn with a hot vixen from Ringaskiddy. I let out a whoop, again not a familiar act for me. Peter said: “Whoah! That was close!” It was as if magic had been piled on magic. And when I stopped smiling I remembered that the swallows were here.

On the last climb at the back of Maryborough Hill, Peter took off. He stood up, dancing on the pedals like Marco Pantani. I said to myself: “Go on, you good thing. Dowcha boy,” and away he went, leaving me in his wake. He took off down the hill too like the proverbial. I passed a bus stop two hundred metres behind him and a young French looking woman with knowing lips stood there. She was rangy tall, with dusty brown boots, her legs in tights crossed at her ankles. Can I use the word? Can I please? Thanks. Insouciance. There, I’ve said it. Yes, she was radiating insouciance. Only the French. But, I wondered: did she know that the swallows were here?

Down past Douglas Golf Club, where I’ve spent many the happy hour with Treas, winding our way around that lovely course; I, buoyed by his laughter and good grace, while the swallows were here.

They had fixed the bad bit of road after O’Gara’s that Mark warned me about last Sunday. Lovely new tarmac there. And Peter and I parted at the Finger Post and I wandered home. I went up the hill at the Well Road strong, on the big cog. Cos I could. Cos the swallows were here.

And there was soccer at Ringmahon, where I got eaten alive by midges once in an AOH Cup quarter final. Probably in the early eighties when swallows were here.

And home. Happy and safe. To Thomas’ smiles and the promise that I’d kick a ball with him later. Later on this precious, singular day. Buoyed by the welcome of coming home safe, the satisfaction of a good cycle, the wonderful knowledge that the swallows are here.

The swallows are here.