The most spiritual place I’ve been is a small field in Brittany, where Merlin is buried with his wife, the fairy, Viviane.

Outwardly it appears a fairly nondescript place. There are no signs, a small space for parking. There’s a little tree, like a whitethorn, in the corner of the field, where believers tie pieces of cloth as prayers, or votive offerings. Merlin is buried under this tree. I felt a great presence there which I cannot describe except that it was powerful, wonderful and otherly. And very real. Even thinking about it now, 26 years later, sends shivers down my spine.

Today I got that same feeling when Ciara and I went to Oku-no-in, on the holy mountain of Koyasan. Oku-no-in is a memorial to Kobo Daishi, the founder of the Shingon sect of Esoteric Buddhism. In fact the whole mountain and the 110 temples active here (in one of which we are staying) are all due to him and the sect he founded around 800 AD which comprises 10 million people today. He is revered as one of Japan’s most revered religious figures and a Bodhisattva.

There is a stunning two kilometre cobblestoned walk up to the main building, the Toro-do, behind which is located Kobo Daishi’s mausoleum. The walk is shaded and towered over by hundreds of huge cedars, venerable old trees, some of which were planted 600 years ago and reach almost 200 feet high. 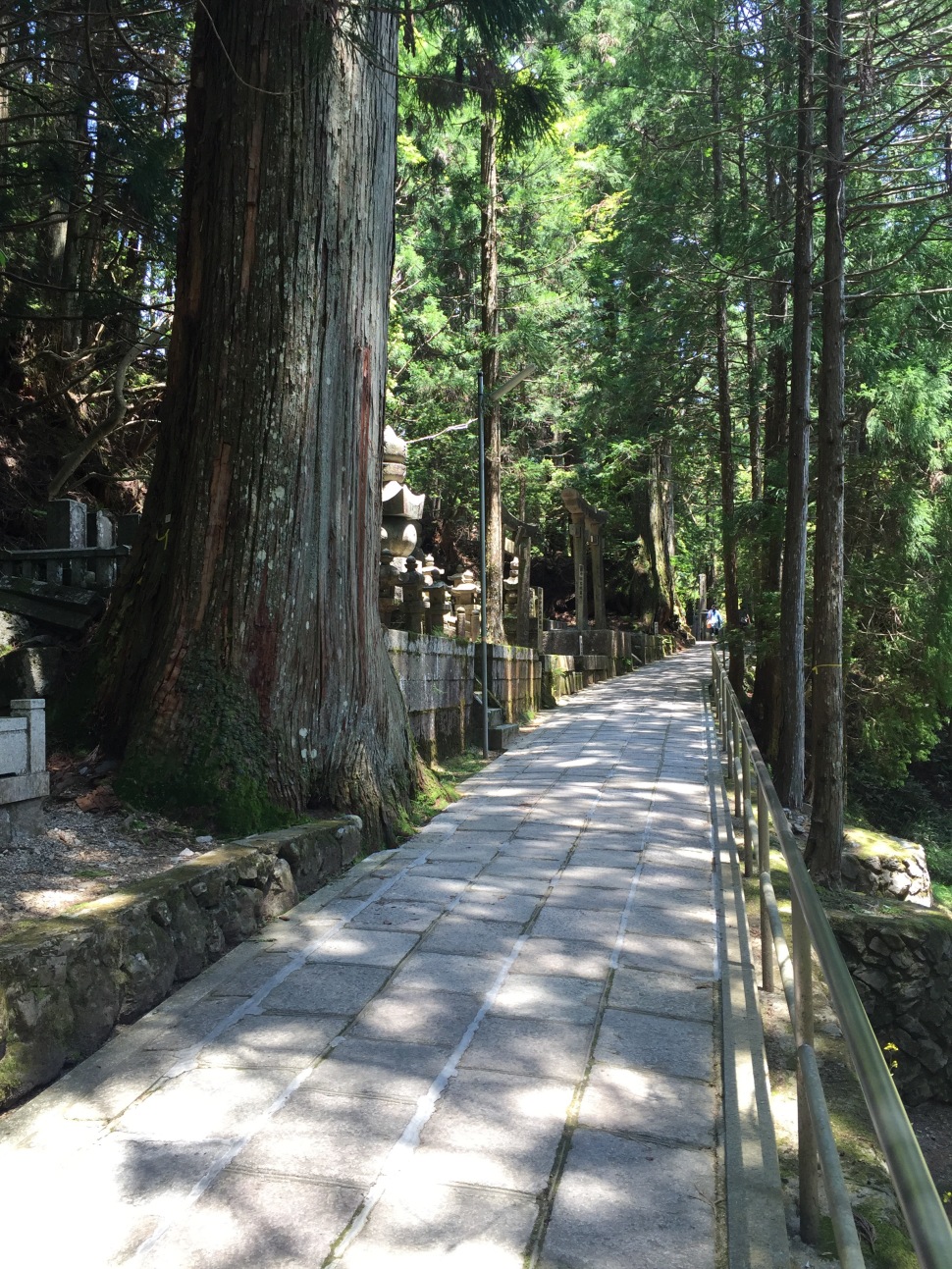 Amidst the cedars and the moss there are 200,000 stupas or gravestones; a vast and beautiful cemetery, containing the remains or part of the remains of many many generations of Japanese Buddhists. They wait, amid the solemnity and the shade and the silence for Miroku, the Buddha of the Future’s coming.

Followers of Shingon believe that Kobo Daishi is not dead. He is meditating, and food is ritually offered to him daily. Only he will be able to interpret the heavenly message of Miroku. And so, as our guide book eloquently puts it, the vast cemetery is like an amphitheatre of souls gathered and waiting for this momentous sermon. 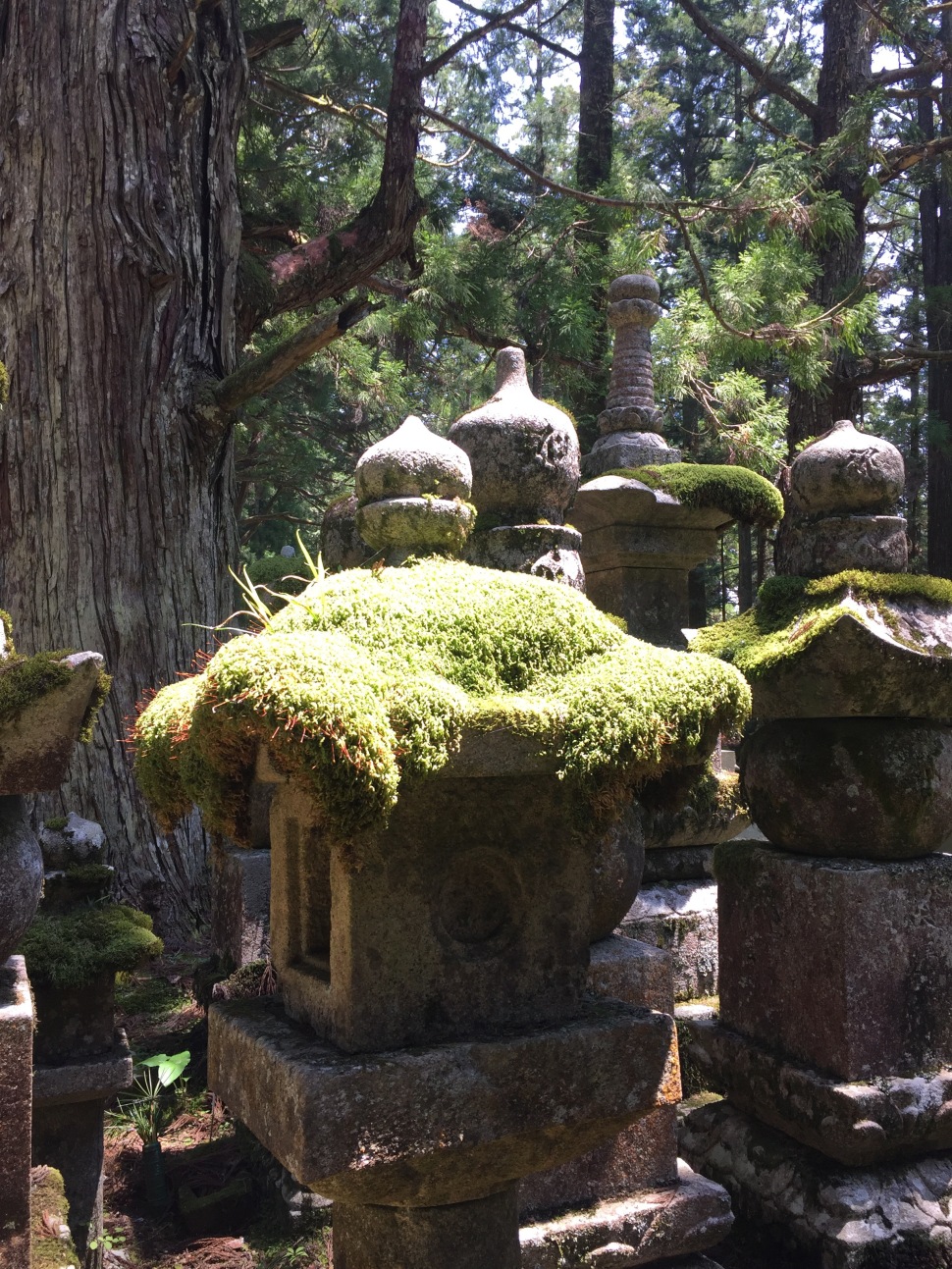 And I wouldn’t mind waiting there with them.

I’ve been to many holy places, though in truth I don’t know what the word means. Cathedrals large and small. St. Peter’s Basilica in the Vatican is a wonder and I was moved there. I was in a very small cathedral in Lismore recently, and it was special too.

I think that any place where large numbers of people pray and hope and wonder (including the great sporting venues) retains a vestige, a memory, a shadow of that hope, those dreams, those beliefs. And when we visit, we can feel them all again, as a type of presence, howmuchever time has passed.

And the vast graveyards of Highgate in London and Pére Lachaise in Paris make us think of the past and the future and the beyond. We feel something in these places too. Something more than ourselves. They give us pause.

And today I experienced something very precious, and I remembered that little field in France, and it was a wonder to me again.